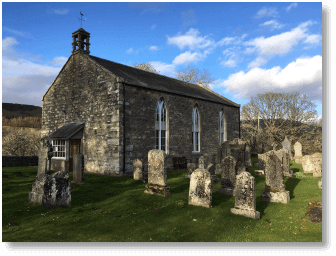 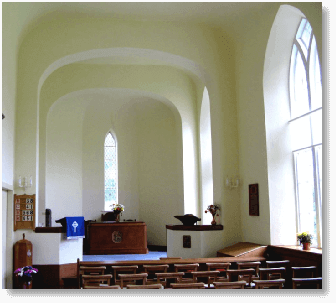 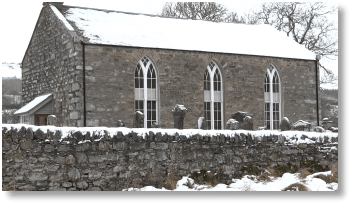 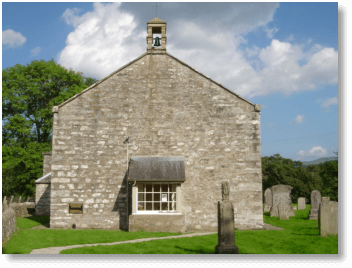 "Some of you may have already heard that Struan Kirk is being put up for sale by the Church of Scotland. It is one of several Kirks serving very small communities in Scotland which, as a result of ever smaller congregations and ever increasing maintenance costs, the central church authorities have decided they cannot afford to keep going.

This lovely place of worship has been central to Clan Donnachaidh for countless generations, ever since Celtic Christianity reached Perthshire many centuries ago. The present building is "only" 19th century, but is built on the spot where all earlier church building have stood. It is itself a place of simple beauty and of peace, in truly lovely surroundings, as those of you who have been there will know and as the pictures accompanying this message testify."

Are you able to help in saving this wonderful church for our Clan? We hope that every Branch of the Clan Donnachaidh Society make an appeal to their members to help in this project, every little helps.

Here in the Clan Donnachaidh Society of Florida we are fundraising by selling the "World’s Finest Chocolate" candy bars at the festivals we attend. We will also accept tax deductible donations to the Clan Society from the button below.

A leader since his birth on January 1, 1917 William has been standing proud of his Scottish heritage.

He has installed this in all his children and grandchildren, whom he brought with him to 2017 Sarasota Highland Games.

There Clan Donnachaidh members Ralph Robertson, Mitchell Robertson, and John Lange raised a few drams of "Uisge Beatha", water of life along with William and his family.

A sure joy was shared by all on this happy day amongst the Clans. Clan Donnachaidh wishes only the best for William and his "clan".

We will raise a dram to William in August at our annual gathering in Scotland this year.

Please see our photo Gallery from the 2017 Sarasota Highland Games for larger photos of William and his Clan. 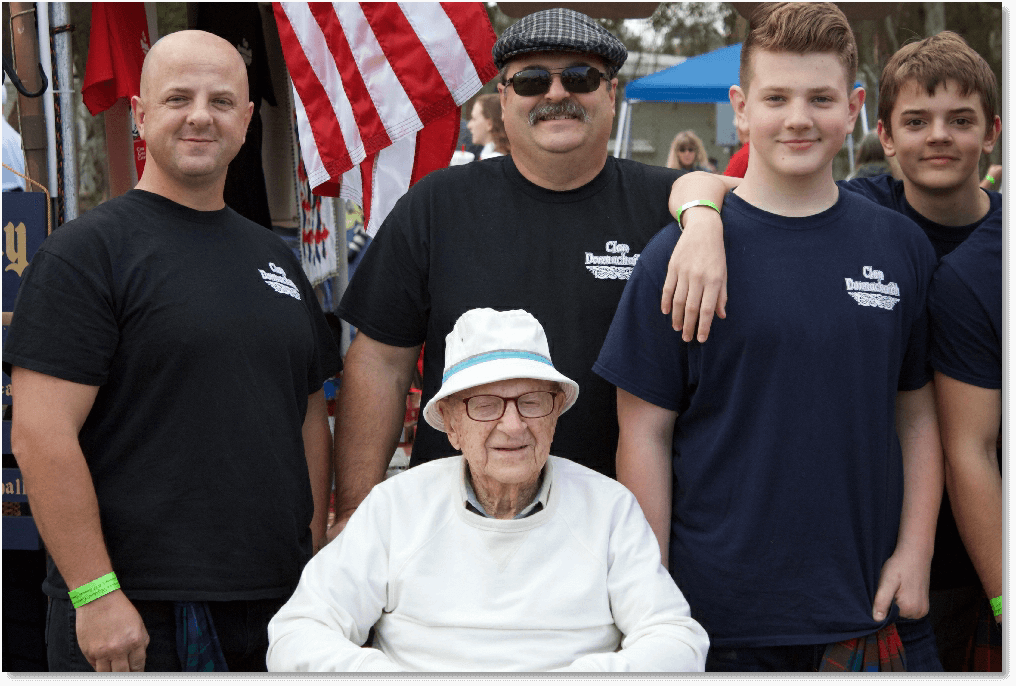 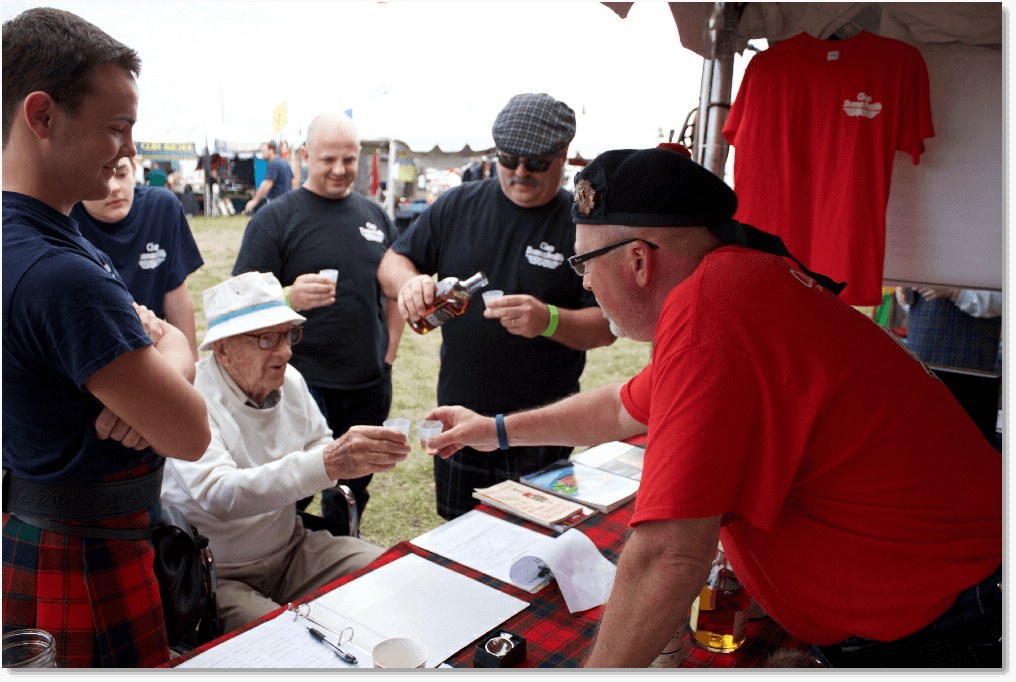 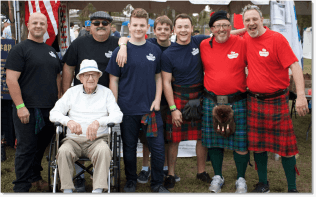 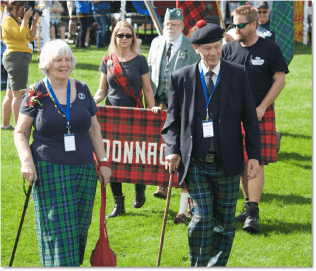 They attended both game days and spent each visiting with local branch members. There were plenty of photos taken with the Chief and wife as everyone was excited to meet and spend a few minutes with them both.

The Scottish American Society of Central Florida honored our Chief during the opening ceremonies of the games where Chief Gilbert thanked the sponsors and commended them on a wonderful event.

Their daughter, Diane, shown here presenting the Chief with a commemorative photo of the presentation. Clan Donnachaidh was proudly represented by Allen & Louise along with eighteen other families at the Sixth Annual Central Florida Highland Games held that year at the Central Florida Fairgrounds.

The second meeting of the Clan that year was a covered dish picnic at Allen & Louise’s home in Casselberry, Florida on February 27 at 2:00 in the afternoon. The fine cuisine was enjoyed after a general meeting to discuss the future of the branch that year.

It was decided that the memberships would be $15.00 for an entire year when received between January 1 and June 30, with memberships received after June 30 would be $7.50. 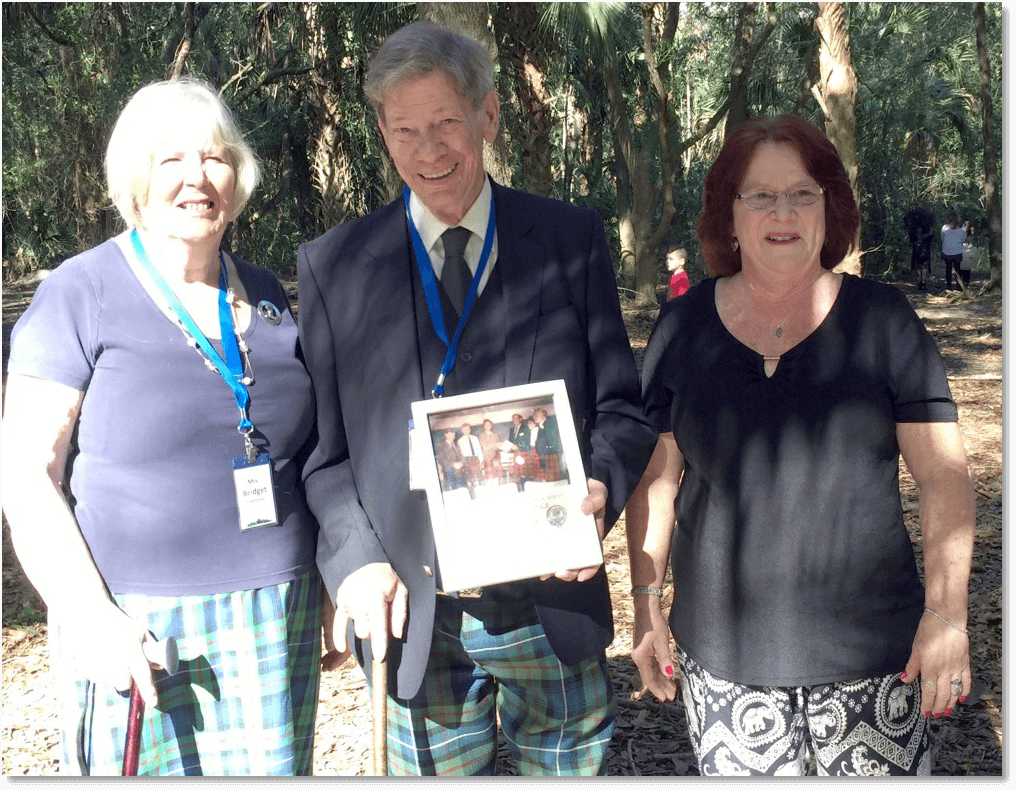 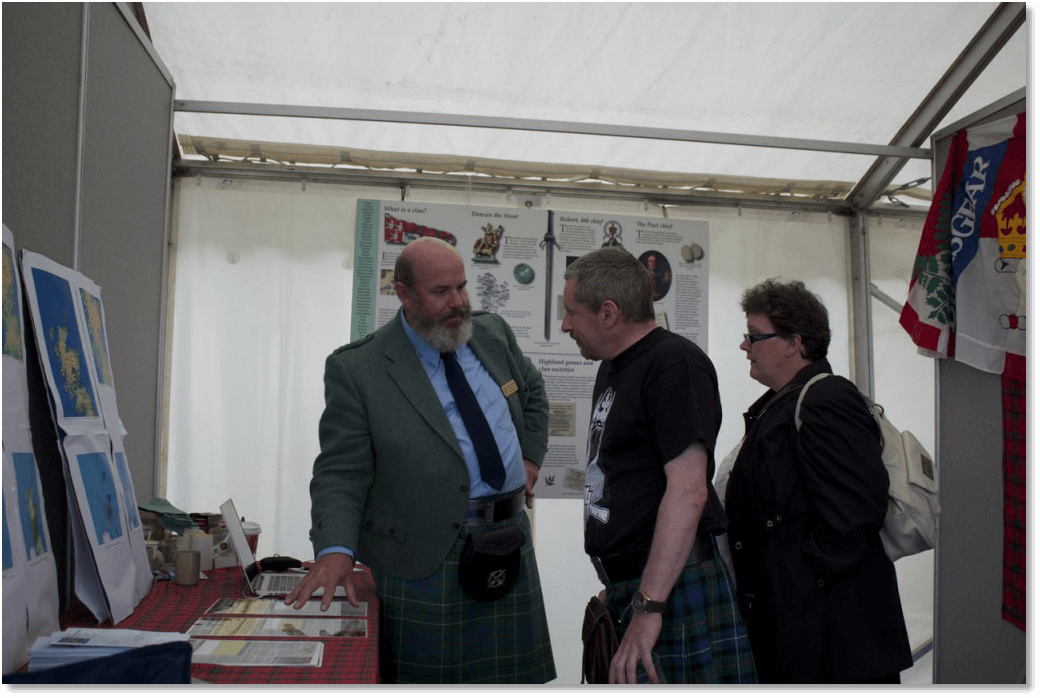 At the recent Central Florida Highland Games we were thrilled to welcome, Tim Duncan, Clan Donnachaidh DNA project administrator as our honored guest. Tim a native of Georgia and recently retired Park Ranger for the National Park Service in Death Valley, is free to pursue hi passion, his family dna.

Family Tree DNA is the organization doing all of the testing for the Clan Donnachaidh DNA project. Please check out all versions of their DNA testing kits. Now is the time to take the next step, just a cheek swab away, in seeking out your Scottish heritage. So head on over to Family Tree DNA at familytreedna.com.

Since its inception on October 28, 2013 by our Area Director, Bill Reid, our Florida Branch of Clan Donnachaidh Facebook page has been a tremendous success.

This page is intended to be a quick, easy and up to the minute means for our members and friends to communicate throughout the year, sharing photos, events and special occasions with each other. By following this links you can jump to:

If you are a Facebook user, visit the page titled, “Clan Donnachaidh Society of Florida”, and click on the “Like” button. When Bill gives the ok you then you can interact with the page. Please feel free to add any of your pictures from the games or activities which you have attended.

Bill will also add announcements and other items of interest to our members. We will not accept any type of sales pitches, political opinions, or questionable material. This site is to promote and share our Scottish heritage. 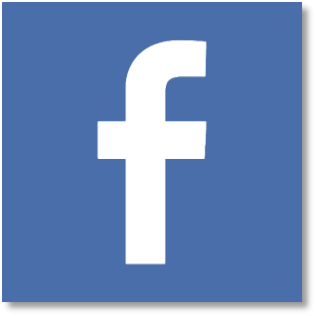